The Standard and Lite SmartCoach™ systems are perfect solutions for coaching single athletes/patients, small groups or for periodical assessments, but have limitations for massive, daily use with large groups of subjects. This is because a coach or physiotherapist is required to operate the software, working with one subject at a time. Even if using two or three SmartCoach systems, data would be scattered onto different computers.

SmartCoach™ Pro, instead, allows simultaneous recording of several trainees on different machines. Therefore, strength coaches or physiotherapists can focus on checking the execution of an exercise instead of operating the software.

Data from the different training stations is automatically recorded on a single, central database for later analysis. The procedure is completely automated, allowing efficient recording of each and every training session of each subject. This permits the assessment of training progresses with a level of detail never possible before.

SmartCoach™ Pro is not a stand-alone product but an integrated, modular system composed by a network of interconnected devices, to sensorize and monitor an entire environment.

Each training station is equipped with an acquisition unit (Power Encoder for weights, Lite for flywheel devices) and a SmartCoach Pad, a terminal with touchscreen display which acts as the athlete's interface. Each trainee - athlete or patient - has a personal radio identification (ID) wristband or card, used to log into any of the Pads.

Each Pad is connected wirelessly to a main computer (the server); it contains the database where the data from the various athletes and Pads is collected. The server is equipped with the usual SmartCoach software (read more here) with some extra features specific for the Pro system.
From the server it is possible to manage the entire system: create training plans for all the trainees and analyze the data collected from the various Pads, exactly as with the usual SmartCoach™ software.

Optionally, additional workplaces (clients) can be installed; they work identically to the server and allow several operators creating training schedules or analyzing data in parallel.

Finally, as for any SmartCoach™ system, the remote coaching feature is available. Through an internet connection, remote coaches can access the entire Pro network, allowing full control of the entire environment from distance. For example they can coach, supervise and collect data from an entire team or training ground from remote.

How does it work

Although sophisticated, the key feature of SmartCoach™ Pro is ease of use. In fact, the Pad interface is so user-friendly that athletes or patients can operate it by themselves.

Although sophisticated, the key feature of SmartCoach™ Pro is ease of use. In fact, the Pad interface is so user-friendly that athletes or patients can operate it by themselves.

At any training station, the trainee approaches his ID wristband/card to the Pad reader. The Pad recognizes him and displays his training schedule, also indicating the next exercise in the circuit.
The trainee just touches the exercise icon and starts training. The feedback guides him to the prescribed objective, while acquisition starts and stops automatically and data is transferred to the server. All without the need for an operator nearby!

At the end of each set, a timer shows the recovery time and optional effort/pain indexes are asked. While the trainee recovers, someone else can use that station. If he returns for the next set, the residual recovery time - if any - will be displayed.

Since there is no limit to the numer of Pads in a SmartCoach™ Pro system, several athletes can exercise independently and simultaneously on different stations, with enormous time saving with respect to a classical system. 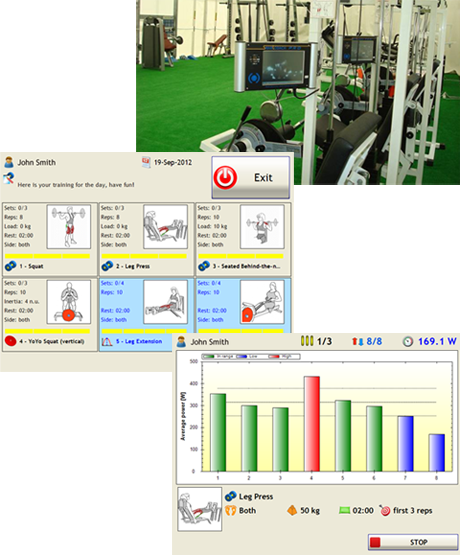 Data from the different stations and athletes is automatically acquired and stored on the server. At anytime during or after the training session, they can be analyzed on the server, as with a conventional SmartCoach™ system.
If the network comprises one or more optional client workplaces, several operators can analyze data and generate reports in parallel.

Is it really that simple?

Actually, it is! The physiotherapist or strength coach are using the same classical, powerful and user-friendly SmartCoach™ software. No efforts to upgrade from a standard system to Pro!

For the trainee it's equally easy: approach the ID wristband, check the intuitive schedule, touch the exercise icon and start training with feedback. Everything else is done automatically.
Since each Pad can be configured for exactly the machine it is mounted onto, it's impossible to mistakenly record an exercise of a wrong type (e.g. a bench press exercise on a leg extension machine).

SmartCoach™ Pro features a number of additional functions, including: automatic shutdown at a predetermined time, periodical data backup, automatic software upgrade of the Pads from the server, and much more. Even the screensaver on the Pads can be personalized by uploading a custom video.

More value for the money

The Pro system is completely scalable. Pads and training devices can be added at anytime without reconfiguring the system. If your need is to monitor a numerous group of athletes or subjects, SmartCoach™ Pro is a more convenient solution than several separate, classic SmartCoach™ systems.

Finally, the Pad can alternatively be used as the Exentrix user interface. All the exercise data while training with Exentrix will automatically be sent to the server, for later analysis with the same SmartCoach™ software.